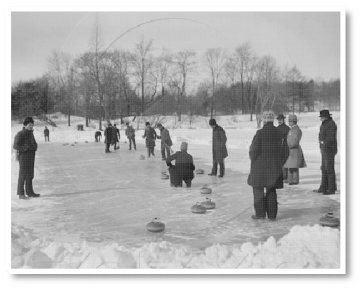 Curling in Willmar began in 2004 when the City of Willmar installed an ice making system in the Blue Line building. That winter a “rag-tag” curling league was organized, and the Willmar Curling Club was born. The Willmar Curling Club began to take hold as the years went by. This club has grown over the years through the dedication of the founders and members. Willmar Curling became a 501(c)(3) non-profit in 2008 to enable the club to raise funds for youth and adaptive programs and begin our journey toward a dedicated facility. The Willmar Curling Club has left its mark on the sports of Curling in many ways. Two of our members have become United States
Curling Association (USCA) Officials that have officiated events across the U.S., Switzerland, Sweden, Russia, South Korea, and the 2018 Winter Olympics in South Korea. Another Willmar member is a USCA Ice Technician that travels to events throughout the U.S. to make the ice needed for Curling events. Yet another member has become a prominent USCA Instructor that has traveled to many regions to teach others to become instructors of the sport. Our 106 member club has more than 20 members that are certified USCA Officials and 7 certified USCA Level I and II Instructors.
The Willmar Curling Club has drawn attention to our club and the Willmar area with two National Championship events. In 2013 we hosted the U.S. National Mixed Championship and in 2016 the National Junior Championships. Many of the athletes from these events still talk about the great experience they had in Willmar. These National events show the dedication of our membership, with roughly 70% of the members volunteering to make these events a success. The club provides WCER with the staff and instructors for open, youth, and adaptive curling programs. We currently have two youth Curlers that will be competing in the 2018 National Junior Championships in Detroit, MI.

The Willmar Curling Club began looking to find a way to develop a dedicated facility for Curling. The addition of a dedicated Curling facility in Willmar will have many positive implications for the Civic Center and the Community. It will allow more time on the existing sheets of ice for hockey and figure skating. The Curling Club would have more time for youth and adaptive Curling, additional Bonspiels and special events that would draw participants needing food and lodging. The new facility would add another option at the Civic Center for summer use that would include a dining/catering area. In August of 2016, the Willmar City Council voted 7 to 1 to commit to an agreement with the Curling Club that included land, soil corrections and sewer and water for the site. To better reflect the large area of West Central Minnesota that Curlers come from, the name was changed to Glacial Ridge Curling in 2016.

The Growing Sport of Curling

Prior to reinstatement as an Olympic sport in 1998, curling had been a niche sport in the United States. Due to nationwide exposure through Olympic television coverage, curling has been expanding rapidly. In 2015, membership in the U.S. Curling Association (USCA) topped 20,000 for the first time. Countless people are also introduced to the sport each season through classes, corporate events, and community outreach.

Between 2000 and 2016, the number of curling clubs registered with the USCA increased by over 70%, from 99 to 171. Much of this growth is due to the establishment of clubs that curl in multi-use ice arenas. The number of arena-based curling clubs jumped from 10 in 2000 to 73 in 2016. That’s a 630% increase. Through the growth of
these arena-based clubs, curling has expanded to many southern and western states. At present, curling opportunities are available in 45 of the 50 states.

While not mentioned in the general information above, one of the best examples of growth in metro areas is in the Twin Cities. For many years, St. Paul was the only curling option. Ten years ago, we saw the opening of the Dakota Curling Club (named for Dakota County, Minn.). Dakota Curling curled in an arena for 10 years and just opened a new, six-sheet facility in January 2017. They increased by approximately 300 members in the first few weeks they were open. They got the confidence to make the transition through the success of the Four Seasons Curling Club and Chaska Curling Club, which both opened in the past five years. Frogtown Curling facility is also in the area. It looks like there will be about 3,000 curlers just in the Twin Cities metro area this year. For the Minnesota region there were 3,278 curlers in 2010 and in 2017 there were more than 5,564 curlers.

The USCA statistics show that more than 60% of curling clubs in the United States draw members from population centers of 100,000 or less. Communities of 100,000 or less support dedicated clubs ranging in size from 2-8 sheets, with four sheets being the most common. More curling clubs are found in communities drawing from populations of 10,001-20,000 than any other range. Membership has increased between 40% and 263% in the first two years for all previously existing clubs that opened a new dedicated ice facility between 2010 and 2014, with an average 88% increase in membership in the first two years. The Willmar Lakes Area Chamber of Commerce estimates that Willmar, with a population of 20,000, is a regional hub servicing a population of 100,000 in West Central Minnesota. This data shows that Willmar has the potential for growing the sport of Curling. Glacial Ridge Curling had to turn away curlers that wanted to join our leagues due to the lack of ice time.