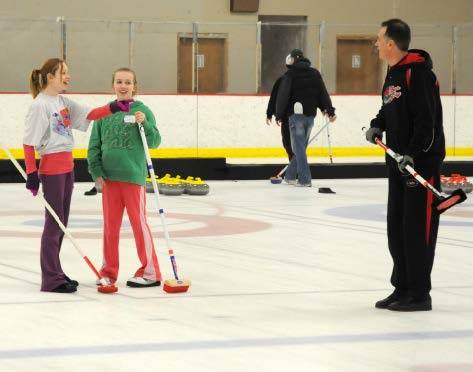 Glacial Ridge Curling’s Adaptive Program began in 2011 and offers a one-hour weekly class to area residents with special needs. All of the participants are either cognitively and/or physically challenged and range in age from the teens on into the seventies. They are ‘coached’ by volunteers from GRC who help them learn to curl with a physical aid, somewhat like a shuffleboard stick. With this, the curlers are able to send the stone toward the target from a standing position rather than the difficult crouching and sliding of a conventional delivery. They also are not expected to do the vigorous sweeping as our volunteers assist with that.

Originally intended to help feed the United States Curling Association’s wheelchair program which is a team event in the Paralympics, Glacial Ridge advertised its first classes to all people in need of physical assistance in order to draw more attendance. It quickly became more of a Special Olympics type of group, serving the current demographic of residents in the area who depend on the Health and Human Services industry to assist them in their daily lives. Through trial and error, we learned the methods that best work to teach the sport, build their skills and keep it fun for all.

On the surface, the class is simply a chance for the participants to get out, try something new and have some fun. It is all of that and more. What has been discovered through the years is that everybody - from the players, healthcare staff and the participant’s families, to the volunteer staff and spectators, has been enriched with new relationships and feelings of worth and accomplishment. The players have all learned that they are capable of doing something that they would never have thought possible before. Simply being on the ice is often a new and sometimes frightening experience, but a challenge they overcome. Learning to play a sport that most people don’t understand and being able to compete in a friendly, honorable way creates a sense of accomplishment and forms a bond between the players and staff. Those who are able to verbally express themselves are always eager to tell the average person that they are curlers, and they all love to meet other curlers and volunteers on the street.

Some of the players have even been involved in the association’s annual Novice Bonspiel. Playing many games over multiple days can be difficult, but the staff and the opponents, as well as the spectators, have always supported them both on and off the ice with respect and equality. This inclusion has helped build their self-esteem and is carried over into their daily lives. In fact, we’ve received very heartfelt testimonials on behalf of a couple of the players that have expressed how extremely important curling is and how it has literally changed their lives by giving them confidence, and even to overcome illness in order to get back to curling with the group. These are also rewarding experiences for the volunteer staff of Glacial Ridge who has been shuffling their work schedules for the past seven winters in order to provide this opportunity in the limited ice time slot available on a midweek afternoon. The chance to offer the Adaptive Program at a different time would certainly, be welcomed by the staff and would provide increased access so that more people to become involved.

In 2018, Glacial Ridge Curling (GRC) hosted approximately 200 students from Litchfield and Montevideo schools for learn to Curl instructions. We would like all schools in our area to have this opportunity. Due to the lack of ice time, we can only offer this during the day on Thursday. This limitation makes it difficult for schools to schedule student field trips. A couple of the Montevideo students enjoyed Curling so much that they
brought their family to Open Curling on the following Saturday.

GRC had two of our youth curlers excel in the sport to point that they competed in two National Championships in 2018. The success of these Curlers can be attributed to their learning to Curl with their families and participating in weekly leagues. GRC’s hope is that more ice time will foster more of this type of youth participation in a family oriented sport.

With the added ice time of a dedicated facility, GRC would like to see Curling become an option for physical education in the schools and college. Many communities with dedicated curling facilities have this program available. This opportunity would open the door to a sport that every generation in a family can enjoy together. GRC has had three generations of one family compete in our bonspiels.